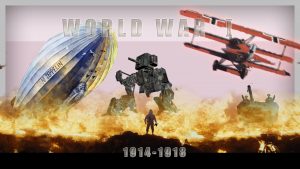 It is blood boiling war imminent,be a part of the greatest battles ever known to man.
on land, air and sea as you witness the birth of modern warfare.
The Sinai Desert>>>>>
You’ll need to make tactical use of the dunes as you engage in explosive battles.
Fog forest>>>>>
Be careful, be careful, and then be careful, right, which is the deadly mustard of green gas.
Occupy the fortress>>>>>
And then a strong fortress can also be destroyed, with your wisdom to find the enemy’s weakness, ripping a trail.
The Battle of Paris>>>>>
Fight on the streets and squares in French city,the British and the Germans desperately seek to control
the depths of the city.
Field battle>>>>>
A massive attack on the scarred battlefields of northern France.
the German army throws everything they have to try to break through the British lines.
Prepare for truly cataclysmic assaults as you push

World War 1 changed the notion of how war was fought, but the end goal was still to inflict as much
damage as possible to force the enemy to surrender.